MCAN Board of Directors sees transitions 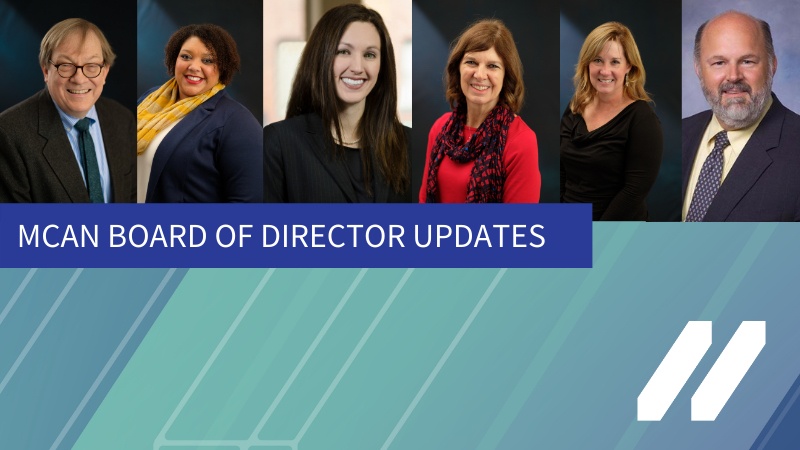 As we enter September and begin the transition to autumn, MCAN’s Board of Directors is undergoing some transitions of its own. Several board members are changing roles, and a new member has joined the board. The Board of Directors provides critical governance and financial oversight to MCAN, including the approval of an annual budget and quarterly financial statements, reviewing the annual audit, adopting polices to govern the operations of the organization, and recruiting new board members as needed. The board sets the strategic vision, values, and priorities for MCAN and monitors progress toward achievement of MCAN's programmatic goals.

The September 2020 MCAN Board of Directors meeting included many changes:

Thank You to Dr. Patrick O’Connor
Patrick O’Connor concluded his two year term as chairperson of the MCAN Board of Directors. During his leadership, the board appointed an interim executive director, named the Board of Directors Award after MCAN founder Brandy Johnson, transitioned some board members, and hired a new executive director, Ryan Fewins-Bliss, among other things. O’Connor has served on MCAN’s board since its inception in 2010 and will continue to serve on the board.

New Chairperson: Maddy Day
Maddy Day is the new chairperson of MCAN’s Board of Directors. Day, who joined the board in 2018, previously served as board vice chairperson. During this upcoming tenure, Day will provide leadership and support as MCAN evaluates its current strategic plan and looks forward to its next plan.

Board Treasurer: Cathy McNamara
Cathy McNamara is continuing in her role as treasurer of the board. McNamara joined the board in 2012 and has served as treasurer since then. In this role, McNamara chairs the audit committee and works closely with the MCAN team to ensure financial compliance. McNamara also serves as a member of the Board Executive Committee.

New Board Member: Dave Campbell
MCAN welcomed new board member Dave Campbell, superintendent of the Kalamazoo Regional Educational Service Agency (KRESA). Campbell replaces Scott Menzel, who took a position in Arizona. Campbell has been supportive of local college access networks in Kalamazoo and is a proponent of postsecondary education.

MCAN’s Board of Directors currently comprises 14 volunteers who support MCAN’s mission and values.  To meet the rest of the MCAN Board, click here.