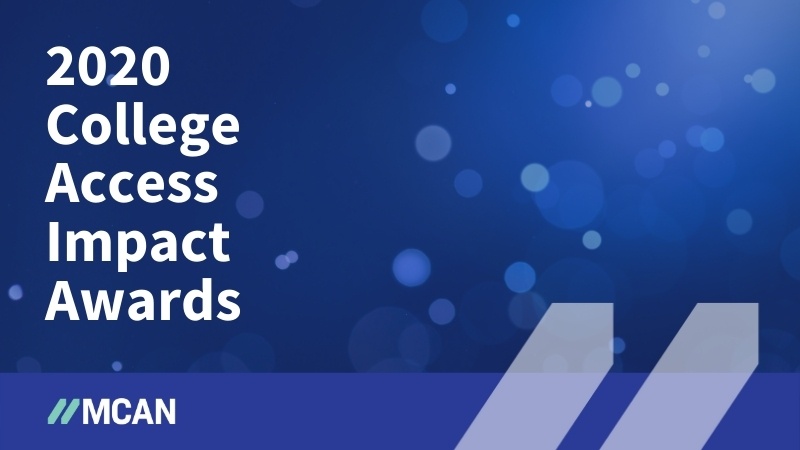 LANSING, Mich. — Michigan College Access Network (MCAN) recognized 10 outstanding postsecondary  education advocates from across the state this month in a series of online videos. The College Access Impact Awards are traditionally given out during MCAN’s annual conference, which was canceled this year due to the COVID-19 pandemic. The theme of this year’s conference was to be “10 and Counting,” recapping the past 10 years of MCAN’s work and looking ahead to the next 10 years, focusing on the statewide postsecondary attainment goal of 60% by 2030.

“The College Access Impact Awards showcase the individuals and organizations who have made  extraordinary efforts to improve postsecondary attainment,” said Ryan Fewins-Bliss, executive director of MCAN. “The award winners play a key role in ensuring that students are college and career ready by increasing college applications, FAFSA completion rates and college enrollment. By working to build an inclusive college-going culture, these award winners are helping to create a brighter economic future for Michigan’s students.”

Since these awards began in 2015, 64 people and organizations have been recognized by MCAN.

This year, a new award was established with the Michigan Promise Zones Association: The Promise Keeper  Award.

The Flagship Award recognizes those who develop sustainable college access networks. The Lapeer County CAN has demonstrated strong, consistent and impactful efforts within the county to increase postsecondary  attainment.

“Lapeer County’s CAN is a great example of an effective rural Local College Access Network with a strategic  connection to efforts across the county,” Fewins-Bliss said. “Lapeer County CAN has a strong and talented coordinator, Ann Konarski, who is deeply engaged in the larger statewide college access network.”

The Marina Award recognizes a school that has advanced a college-going culture and/or tackled systems-level  change within the school by engaging all stakeholders in creating a sense of urgency around the postsecondary planning process. Escanaba High School has taken an innovative approach to improve college readiness, dedicating staff and curriculum to support early middle college students.

The Ombudsman Award recognizes people whose passion for college access helped them persevere through  challenges while engaged in their year of service as an AmeriCorps member through one of the college advising programs in Michigan.

▪ Jacquelynn Deneau was a member of AdviseMI serving Addison High School. She is “a self-starter  who takes a holistic look at community engagement to create a college-going culture,” according to Fewins-Bliss. She has identified points of contact for homeless youth and has a passion for encouraging apprehensive students to pursue postsecondary education.

▪ Tiffany Hackett was a member of the Michigan College Advising Corps serving Chandler  Park Academy. Hackett has taken a creative approach to enhance the college-going culture in her school, has increased application completion and has connected with advisers on the state and national level.

▪ Jassadi Moore was a member of the Michigan State University College Advising Corps  serving Detroit Cristo Rey High School. Moore has demonstrated outstanding community engagement and she has increased family engagement within her work. “She continually encourages students to find the right fit and match,” said Fewins-Bliss, “which makes a world of difference for students.”

The Fleet Award recognizes an individual or organization that has significantly contributed to the college  access field outside the walls of K-12 institutions. Wayne State University has been a long-term partner of MCAN’s AdviseMI college advising program. In the past few years, Wayne State has actively demonstrated a commitment to postsecondary attainment through its Warrior Wayback program and its most recent Heart of Detroit pledge. Wayne State continually is focused on outcomes and creative partnerships.

The Beacon Award recognizes those strengthening success through partnerships. MACAC has demonstrated  an eagerness to partner on postsecondary attainment efforts and has approached its work with a strategic mindset. MACAC continually thinks outside the box to move work forward. For 20 years, MACAC’s Urban Counselor Workshop has provided excellent professional development to school counselors in the Southeastern Michigan region. MCAN also celebrated the 50th anniversary of MACAC and the impact of five decades of work in the field of college admissions through the Beacon Award.

The Chief Mate Award recognizes a school counselor or school counseling program making significant strides  in advancing the college readiness and enrollment supports and services to students. Helwig is a strong advocate and access champion in her community. She has driven the conversation about improving college access and served as a course facilitator for MCAN’s School Counselor Postsecondary Education Training Course.

The Compass Award: Tonya Allen of The Skillman Foundation

The Compass Award recognizes those who advocate for or support advocacy focused on increasing  Michigan’s postsecondary attainment rate. Allen has been a long-term, fierce advocate for the City of Detroit and its young people of color. She has supported college advisers in area schools and LCAN work in the city. Tonya also co-chaired the Coalition for the Future of Detroit Schoolchildren and served on the Community Education Commission.